Education generally in Nuba has been one of the biggest problems besides Water and Health more specially in the forma SPLA/M controlled areas. where the SPLA/M government introduced the English language to be the tool of intruction in all the schools within their boundery. Most parents had negative atittude towards education mainly early child education, Girl child education still remains a threat to the young generation. Early marriages is still seen and also high turn of girls drop outs for marriage still remains a challenge More so, the quality of basic education remains unsatisfactory due to factors such as; lack of healthy school environment, unavailability of basic learning materials, poor implementation of the curriculum, and shortage of qualified and committed teachers. NCDO introduced the education program with most focus on early child Education. One nursery school was started in Tima by IAS in which NCDO took over the evoral resposibility on its self. Other schools later were established and this year the Secondary school also was born. NCDO is also introducing the special needs education program to Nuba Mountains and later to other parts of Sudan where need be. 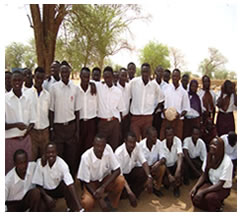 ONE OF THE EDUCATION PROJECTS IS SECONDARY EDUCATION, SENIOR TWO STUDENTS enjoying a group photo

NCDO has newly introduced the secondary education following the request from the community and some students who study in the existing english schools in south Kordofan. The school now has 50 students who came from the two counties of Dilling and Lagawa. NCDO brought in 6 teachers from South Sudan who are currently running the school. The school is sharing one of the nursery school classes for the moment and it will be moved to its own site after the construction of the structures. NCDO has gotten some friends in Germany who promised to fund for the school construction and the project will start in November 2009. This year the school registered a number of new students from around the two counties of Lagawa and Dilling. The number of students now has reached to over 120 students.